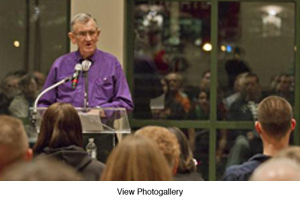 Christians and Muslims, students and senior citizens, professors and ardent learners gathered together to hear Koldenhoven’s story of how, as mayor, he faced challenges in 2000 to stand firm in his Christian belief to “love your neighbor.”

Because of his efforts in the defense of religious freedom and tolerance, Koldenhoven received the John F. Kennedy Profile in Courage Award and a special recognition award by the Arab American League.

For Elizabeth Fiala ’12 of Minneapolis, Minnesota, the lecture arrived at the end of an interfaith service project that she participated in with some fellow Trinity students and area Muslim students. “It was new for me to be able to interact with people of the Muslim faith for such an extended period of time, and I definitely learned a lot,” said Fiala, who serves as Student Association senior class representative and as a member of Trinity’s Ethnic Diversity Committee.

“Dean Koldenhoven is an example of a person who is participating in effective dialogue with the Muslim community, and I think that Christians can definitely take something from his message,” she said of the WorldView lecture.