Messmer Speaks at Final WorldView of 2017 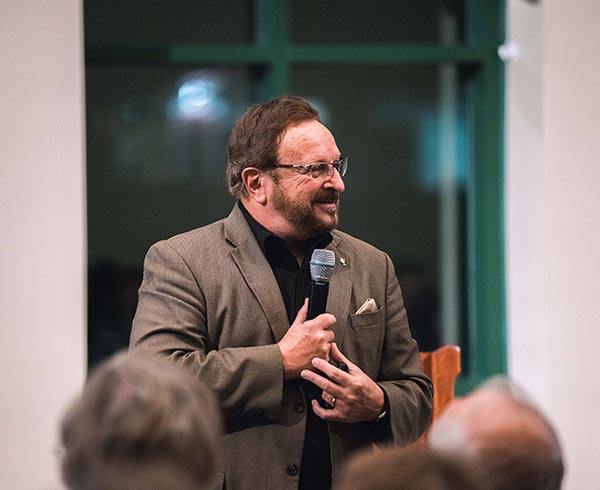 Take an inventory of the very special gifts in your life, and remember that these things are fragile, temporary, and on loan. That is the advice that Wayne Messmer, a local legend for his performances of the National Anthem, recently offered at the final WorldView lecture of 2017.

“As easily as they have been given, those gifts can be taken away,” said Messmer, who has a 2016 World Series ring from the Chicago Cubs, for the number of times he has sung the National Anthem for the team. “Use them. Respect them. Share them.”

Messmer understands how important it is to treasure our gifts. On April 9, 1994, he was shot in the throat during an attempted robbery following a Chicago Blackhawks game. After the shooting, Messmer underwent 10 hours of surgery, and it was unclear for months if he would ever be able to sing again. He credits his recovery to his faith, friends, and family, particularly the encouragement of his wife Kathleen. “She told me that we shouldn’t accept anything except complete recovery,” he said.

Six months later, Messmer’s voice recovered enough to allow him to sing the National Anthem at the inaugural home game for the Chicago Wolves, a minor league hockey team Messmer helped found. Despite finding his voice again, Messmer still felt a great deal of anger toward the 15 year old and 16 year old who were involved in the attempted robbery and shooting. “I realized the only antidote for revenge is forgiveness.” So Messmer eventually visited the older teenager in prison, where they spoke for 2.5 hours. “Somewhere, sometime, someone has to break the chain of hatred and revenge.”

Messmer also discussed how he had four goals that got him through his darkest days after the shooting: to not let anyone ever steal from him the opportunity to sing with his wife; to see the Wolves become a success; to record an album; and to sing the National Anthem for the Chicago Cubs at a World Series game. On Oct. 30, 2016, he was able to realize a version of each of those goals. During that one memorable day, he sang for friends at a party. He serenaded his wife with songs from his album, “So Lucky to be Loving You.” And he sang the National Anthem at a Wolves game before heading straight to Wrigley Field to sing the same song before Game 5 of the World Series.

“And the kicker is, I decided to wear the same shoes I was wearing on the day I was shot,” he said. “It was a symbolic victory for me.”

Messmer mixed his talk with several songs, including leading the audience in singing the “Star-Spangled Banner.” He closed by paraphrasing Lou Gehrig: “We all have so much to live for.” 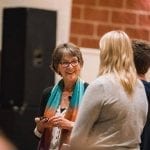