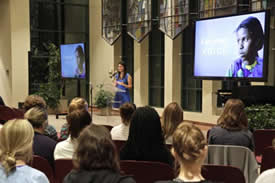 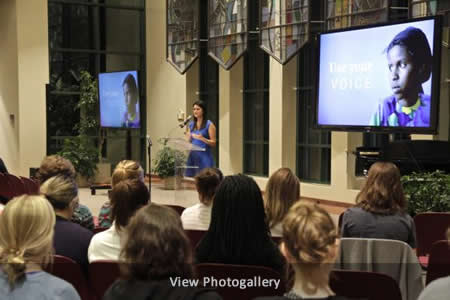 In the world today, there are approximately 20-30 million victims of human trafficking.  Due to a large demand for cheap goods and commercial sex, men, women, and children are exploited worldwide through prostitution, forced labor, debt bondage, and many more horrific crimes.

Emily Pasnak-Lapchick, an End Trafficking Officer for the U.S. Fund for UNICEF, called the audience into action at this year’s second worldview series lecture, titled “Working Together to End Trafficking”.  Emily developed a passion to fight against human trafficking as a young girl visiting India with her family.  Her parents let her take in and wrestle with the fact that children her age were out on the streets selling trinkets to survive.  “If I would have been born in a different country, at a different time, or to different parents, that could have been me,” She said.  It could have been any of us.

Emily shocked her listeners when she brought the issue close to home.  Human trafficking is not just an international problem.  This issue has been reported in all 50 U.S. States, and in 2014, the state of Illinois had 140 documented cases of human trafficking.  She urged the audience to help make change by initiating conversations with friends and family, buying fair-trade items such as soaps, chocolate, and sugar, and learning to recognize the signs of human trafficking in our own communities.  Ultimately, she said “This demonstrates the power we can achieve when we work  together…these are long battles of change we’ll be fighting, but not long ago we were discriminating based on skin color and only allowing one gender to vote.”  There is hope if we all work together. 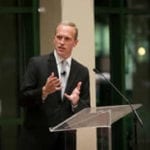