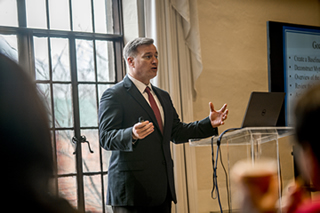 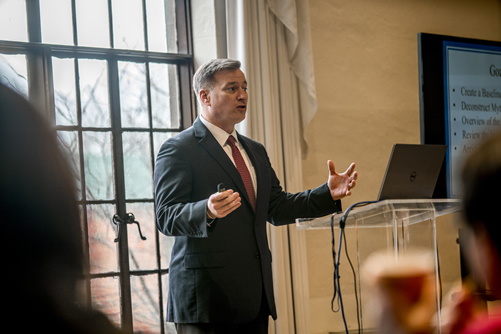 As part of Trinity’s 2017 WorldView series, John Cotton Richmond visited campus on Feb. 24 to share information and insights into the scourge of human trafficking.

The Trinity community had several opportunities to learn from Richmond, a founding director of the Human Trafficking Institute and a former federal prosecutor. During Chapel, Richmond urged attendees to think about the problems they struggle with and how they can solve those. “We don’t end sinful behavior by negotiation,” he said. “By embracing joy and grace, we can get to the root of our problems.”

Richmond told the story of one victim of human trafficking in Chicago. Nadia came to the United States on a visa, and she decided to overstay that visa when it expired. Nadia met a trafficker who isolated her from her friends and church and eventually forced her to become a prostitute. Unlike most victims of trafficking, Nadia kept a journal that included her prayers to God to help end her problems. God used FBI agents and federal prosecutors to answer her prayers, Richmond said. “Nadia is free now and learning to thrive,” he said.

While most people don’t have problems that are as severe as Nadia’s, everyone has their own struggles, Richmond said. “We rationalize them, and we try to make the effects less obvious to others. But we don’t always try to get to the root of our problems.”

Richmond also outlined the legal history of trafficking in the United Sates, from the Constitution to court rulings and federal legislation. 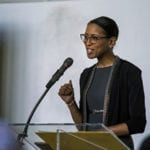