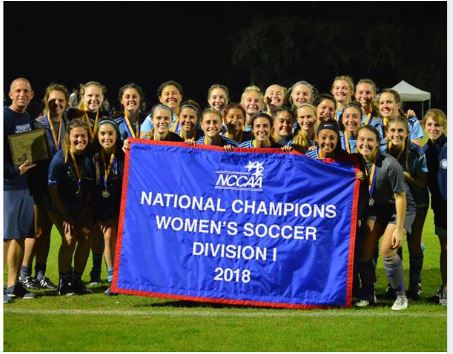 The Trolls claimed the title of NCCAA Division I Women’s Soccer National Champions with an exciting shoot-out victory against Oklahoma Wesleyan University (Bartlesville, Oklahoma).  The No. 1 Trolls and the No. 2 Eagles played to a 2-2 double-overtime tie in the championship game at Austin-Tindall Soccer Complex in Kissimmee, Florida. Trinity scored in the first half to take a 1-0. They fell behind 2-1 in the second period, but tied the score to push the game into overtime. Still deadlocked at 2-2 after the two overtime periods, the game moved into penalty kicks. It took a total of 10 rounds in the shoot-out before the Trolls gained the 9-8 advantage and claimed the victory.

Trinity controlled the play in the first half and had a total of seven shots. They allowed Oklahoma Wesleyan only four attempts on counter plays. In the 39th minute the Trolls got the advantage on the scoreboard when Jessica Bianchi dribbled around the defensive and fired a shot to the far post and into the net. The Trolls held that 1-0 lead at the half.

It did not take long for Oklahoma Wesleyan to even the playing field when they scored within two minutes of the second period. The Eagles continued to put on the pressure and to increased their offensive production with 14 shots. In the 69th minute they gained the lead on a goal from a second chance effort off a corner kick.

Trinity played in that one-goal deficit until the final five minutes of the game. At that point a foul by the Eagles led to a penalty kick for the Trolls. Bianchi stepped up for the free shot and made it count to tie the game at 2-2.  Neither team scored in the final minutes and the game went into overtime.

In the two extra ten minute periods each team had opportunities to score, but the defensive prevented the goals and the 2-2 score remained on the scoreboard.

The shoot-out commenced to determine who would claim the title. Trinity started the shoot-out with good attempts by Jessica Owen and Elly Brummel followed each time by goals by Oklahoma Wesleyan. The Trolls’ third attempt was missed wide, but the tally remained tied at 2-2 as Allyson Kranstz saved the Eagles’ third attempt. The shoot-out continued through the next seven players with good attempts by Erika Perez, Jessica Bianchi, Autumn Bergemann, Lexi Zambrano, Brianna Uhl, Shaelyn Postmus, andTaylor Miller. Oklahoma Wesleyan answered each time until Kranstz stopped their 10th attempt to give the Trolls the 9-8 edge.

For the game Trinity ended with 15 shots of which eight were on goal. Oklahoma Wesleyan had 25 shots with seven on goal. Kranstz ended with five saves during the game and two in the shoot-out.

Jessica Bianchi, who had nine goals in the tournament, was named the Most Outstanding Player of the tournament. Joining her on the All-Tournament Team was Elly Brummel and Selah Hopkins.